There’s long been a debate over which is better – canned beer or bottled beer.

In one of the early seasons of Mad Men there’s a great scene where Don Draper is looking after Heineken’s US marketing account. 1960s America isn’t used to bottled beer, or European beer for that matter, and Don has the great idea to choose housewives as the target market (even though they’re not the beer drinkers). His theory was that European products connote class, something worth showing off at dinner parties. That evening Don and his wife Betty host a dinner party, and what do you know – she has gone and purchased that famous green bottled beer, without a word of suggestion from her husband, purely because of its air of sophistication as it sat in the supermarket shelf, visually striking in comparison to the cans. The guests were impressed. Everyone wins.

Here in NZ beer came out of the pub tap, keg, or cans. When bottled beer first came on the scene in New Zealand it was more along the lines of swap-a-crate bottles (swappas), the kind you’d expect to come across in a country pub or student bar nowadays. People would buy them by the caseload. But with a growing export trade and law changes that meant importing international beers and foods was easier, green bottled beers and their modern counterparts soon started to dominate NZ shelves.

But we’re starting to see a shift in beer labels and the containers they’re in – cans are coming back into fashion. 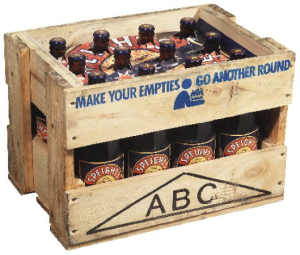 When you look at the history of beer brewing and packaging, cans didn’t really come about until the 1930s. It was more convenient, and cheaper, to buy beer in a flagon from the local pub and take it home with you once the pub closed. But with people starting to drink beer at home and spend less time in public bars, the keg and can became the height of popularity.

In recent years craft breweries and boutique brewers have begun using cans. Russ Phillips from CraftCans.com says that the number of craft breweries putting their beer in cans has more than doubled since 2012. And we’re starting to see this trend really take flight here in New Zealand.

Protecting your beer from external dangers

Beer labels always do a little to protect your beer from external factors; whether it’s a bottled beer label offering some sun protection, or a keg label helping to differentiate the new brew from the old. But there are some distinct advantages to each of the beer packaging choices:

Advantages to a bottled beer

Drinking from a neck bottle beer just has that air of elegance that a can doesn’t. Bottled beer encourages an appreciation of the beverage through the sheer fact it takes longer to drink from a bottle than it does from a can. Bottled beer is pretty good at staying cool in your hand, the glass is recyclable, and you don’t get that metallic taste that canned beer drinkers so often lament.

Advantages to a canned beer

There’s a distinct ‘vibe’ to canned beer labels in New Zealand. They generally have a fantastic piece of artwork on them that looks rather eye-catching when on display in your beer fridge or dinner party table.

Cans offer better protection from the light and air, with their tight seals and light proof exterior. They’re easy to stack, light and easy to carry. And here in New Zealand beer cans are recyclable.

Cans are a favourite with university students and partygoers owing to their lightweight features and pricing, which is also more lightweight than bottled beer. There are also many areas or event, festivals and camping grounds for example, where bottled beer is banned due to the risk of broken glass. No risk of cut feet with canned beer!

Buying in bulk is always cheaper and keg beer is no exception. It’s also a safe way to store large quantities without the risk of ruin from sunlight or being jiggled around and fizzed up in the back of the car or refrigerator.

With any glass label whether it’s a beverage label or otherwise, there are several factors that need to be taken into consideration when going through the label printing process:

You can talk over these aspects with one of Label and Litho’s experts if you’re uncertain whether your label specifications are glass bottle friendly.

One of the most famous beer labels is coming to life

The Simpsons have been a part of popular culture for decades and the Duff Beer Label is perhaps one of the most famous beers out there. After many failed attempts by breweries to get the rights to produce this beer, 21st Century Fox are going after the beer market themselves. Chile will be the first to see this famous beer label on their shelves.

A beer label with a difference

When you’re thinking about designing your beer label it’s important to consider the vessel it’s in as packaging plays a significant part in the label design and label printing process. Beck’s NZ did something a little different, designing a beer bottle that could play music. Check out the video of this very unique beer bottle.

Whether you’re after a shrink sleeve beer can label, a self-adhesive label for your bottled beer, or a printed label for your homebrew, Label and Litho can help.

Our expert team will help you to perfect your label design and size. Get in touch today or if you’re one step ahead then you can request a quote over here.