Take your labels to the next level with augmented reality

Today’s consumers literally have a world of information at their fingertips in the form of their smartphones, iPads and laptops. With so much connectivity available so easily, the amount of communications sent and received is rapidly increasing – particularly communications from brands direct to the consumer. Some feel bombarded, some simply tune it out. For marketers, this means they have to be more creative and innovative than ever to get the consumer’s attention, and keep it long enough to get their message through.

With that, we see some fantastic innovations – from flashmobs, to pranks to viral videos, to incredibly personalised marketing in an attempt to capture attention. Our favourite innvoation when it comes to labels is augmented reality.

Beyond attention grabbing: Augmented reality labels are captivating and engaging 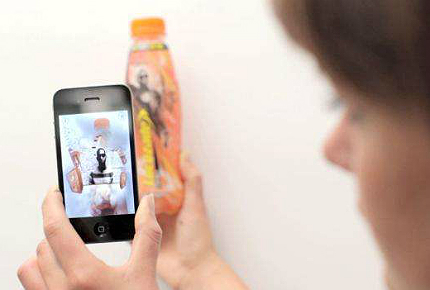 Augmented reality. It sounds intimidating, highly technical and let’s face it: downright terrifying. The good news. No, the GREAT news, is that augmented reality with all of its fantastic features has become super easy.

So what exactly is augmented reality?

Augmented reality is the technology that superimposes a computer-generated image on a user’s view of the real world, thus providing a composite view. This is primarily done through a digital medium: a smartphone, tablet or computer. In the label world, what it translates to most often is the ability to have a user scan your label with their smartphone, transforming their view of your label into something interactive – a video, a game, a website, a 3D visualisation – you name it. The augmented reality world is your oyster.

Augmented reality campaigns allow you to put mobile right at the heart of your marketing mix, creating value and fun for your consumers, engaging them on a deeper level, creating something to talk about and share, help in the sales process, and in many cases drive more product sales. Other results include high levels of engagement and social buzz; click through rates an order of magnitude greater that traditional web-based campaigns; and improved rates of conversion.

For some great examples of these results, these international products have used augmented in creative ways, and with clear engagement and sales objectives and results:

Pringles used augmented reality labels to create a fun game online – you have to use the product packaging to play, meaning more sales and something fun to talk about and share:

Lego used augmented reality as a cool, interactive in store display to show the finished product on a box. If you’ve ever been into a lego store, there are plenty of assembled displays, but they pale in comparison to the amount of different boxes. A 3D visualisation of the finished product on any box adds an extra level of novelty and engagement, and can be taken on the road to conferences and shows, like the one in the video.

TopShop also used augmented reality as an in store display – giving customers the opportunity to interact with a virtual changing room that displays outfits on them.

GE had less of a sales focus, and instead worked on their brand awareness and appeal. GE created something that was sharable and fun, with great success. This one excited reviewer has over 3,000 views already:

When it comes to marketing for social change, a continual challenge is ensuring the audience really understands and empathises the issue. For many causes, they are faced with a lot of wilful blindness – people often choose not to see or engage in difficult issues. In the Netherlands, violence against public service workers is a large issue, and many bystanders are reluctant to intervene. Augmented reality was used to combat this by placing bystanders in situations in a way they couldn’t ignore, and educating them on what they should be doing

Starbucks kept their campaign event relevant with a valentine’s day campaign – the ideal day to encourage sharing of online content!

Whilst Stella Artois could have gone the way of augmented reality beverage labels, they chose instead to use the imagery surrounding the consumer instead – with the Le Bar app, users hold up their phone and locations of bars with Stella on tap appear, plus a bunch of other great in-app features.

The new QR codes are sexy

QR codes have been around for a while, introducing us to augmented reality at a basic level – scan the code and go to a website. Augmented reality has grown and changed. Not only can you increase engagement by automatically showing a video or game, rather than simply leading to a website, but you don’t need that ugly black and white QR code. Now, you can simply scan an existing image and use that to automatically show your demo video, launch your game, call the number on your augmented reality business card, or just about any other digital feature you can imagine.

Absolut Vodka provides a great example of how sexy QR codes can be  – they can be just about any image you want, and launch some pretty exciting features.

Tips to get started with augmented reality labels

The first step is to define your objectives. Make sure you know what you want to get out of the campaign – increase sales, brand awareness, engagement, adding value for the consumer, creating a shareable or viral app. Defining your objectives will allow you to create a campaign around your labels and make sure your engagement hits the mark.

Creating your image is simple – it can be your existing label, or a new, campaign specific one. You don’t need to worry about adding an extra QR code into your labels, or any other technology or changes. You will, however, need to make sure you clearly communicate how the customer accesses the augmented reality features – do they go to a landing page on your site and hold it up to a webcam? Do the use a QR code scanner? Which one? Or do they need to download an app/go to a page in your company app?

Create your content – whether it is an app, a 3D model, contact information, a video or a competition. One of the most important things to keep in mind when setting up an augmented reality campaign is to ensure the content you link to is mobile responsive – it has to work on a smartphone.

Next, you need the right software to link it all together. Depending on your requirements, it can be as simple as an online service like Blippar, Aurasma or Layar, or a more customised solution may be required.

One oft-overlooked challenge is that most campaigns will require a specific app. This has been an ongoing issue for QR code campaigns since their inception. It is important that you communicate in your printed label what app the user needs to download in order to engage with your campaign.

Many apps come with accessible APIs, meaning you can skin the app with your own branding, or incorporate it into any existing apps you have. Make sure this is part of your planning, and that getting your customers to use the app doesn’t hold back your campaign.

Alternatively (or even simultaneously), you can focus your augmented reality campaign on a website (much like the General Electric or Pringles examples) where users hold a product up to a webcam when on your site, which means they don’t need to download an app.

Augmented reality presents a number of exciting opportunities to engage with your customers, create value, drive sales, and of course have fun with your products. We hope this guide and the inspiration in it helps you to plan some cool new marketing campaigns and features.

Finally, here’s an example of a pretty cool use of augmented reality. We’re not really sure how to incorporate it into our labels, but we sure do wish something like this was in NZ!